Blaster-Mines is the name of my current indie project. It started
out as Mine-X
4K, and is slowly evolving into a game in it’s own right. While
Mine-X was simply a scrolling Asteroids variant, Blaster-Mines will
be a combination of Bosconian,
Star
Castle, Asteroids,
mixed with my own creation.

I have spent my allotted after-hours development time taking the
simplified Mine-X engine and creating a nice (but still simple)
object structure based on the state-machine and factory patterns. I
finished up the game shell this morning and then started work on some
of the new graphics. I don’t work very well in Flash, but I really
like the look of vector images for retro-games. I decided to work
with what I know and fire up Gimp to create my player ship and
wandering enemy as pixel graphics first, then translate them in code
to vector. This might sound insane, but eventually the vectors will
be put into bitmap data and need to conform to certain pixel sizes,
so this has worked out well for me (so far).

Here are the 32×32 PNG files of the PlayerShip and the first enemy
type (wanderer) (blown up 2x).

I translated those bitmaps by hand into vectors in code and took
this screen shot from the current build: 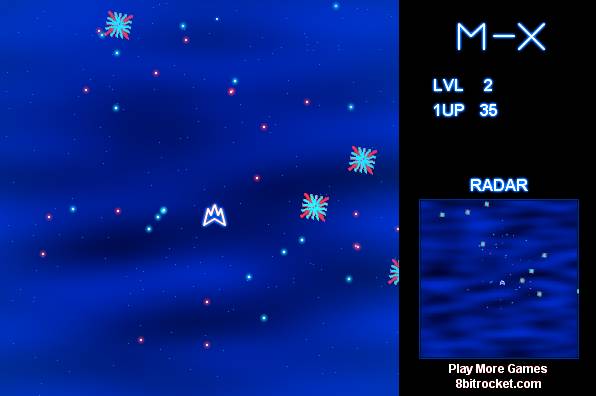 I don’t yet have a glow for these wandering enemy, but I will be
working on that tomorrow. I will probably also clean up both of these
images because I am not satisfied with either of them just yet.

The next actual game play step is to add the Bosconian style bases
(mines in my game) that will need to be destroyed on each level.

One more note: This is the first time I have used Open Office to
edit HTML on my Mac and I couldn’t be more pleased with the tool.
It’s simple, effective, and works as both a WYSIWYG editor and a
straight HTML text editor (at the same time).