Here’s the deal. Don’t piss me off. You know you have pissed me off when your game aggravates me more than the FIVE (count em up), FIVE dress up games. Let me repeat that, FIVE DRESS UP GAMES! FIVE! FIVE! FIVE games where you put clothes on an illustrated girl (and one with a DUDE!). The frustration of having to play all FIVE in a row, and rate them is NOTHING compared to how pissed I am now. Fortunately, all FIVE dress up games are very high quality. The best game of the bunch is called Hero Fighter and it is a treat.

The game that pissed me off so much is the 8bitrocket Game Of The Day, You Only Live Once. From what I saw, it is AWESOME! But, since you can ONLY PLAY ONE fucking time, I am thoroughly pissed off. I didn’t even get to play it as had switched back to this HTML editor to paste in a link to it and died while I was on the other application. Anyway, I love Raitendo and his games, but if someone can show me how to play this game again (I will test it out on another machine tonight, but I mean on the same machine, now) I will be very thankful. I mean, the game where you dress up POSH Spice pissed me off less!

8bitrocket Featured Game Of The Day:  You Only Live Once.

8bitrocket
Featured Game Of The Day: You Only Live Once (Awesome and aggravating at the same time). 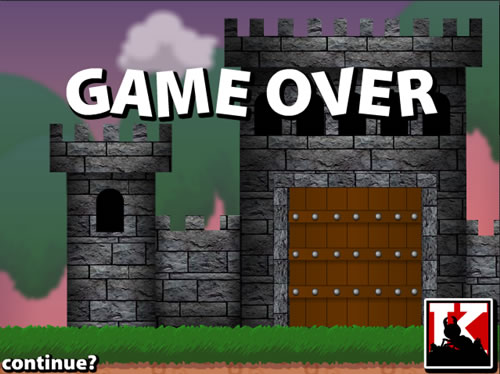 (a screen you will be seeing a lot)

Why is this the featured game:  How to piss Jeff off. You see, this is a great game… the first fucking time you play.
Let’s get something straight right away, Steve and I agree that this game is a stroke of Genius! Raitendo is KING of Flash as far as I’m concerned. But, I never got to play the game even one time.
I will repeat, I love Raitendo, he is a genius, and his game seems great. BUT, you can only play it one time. No matter how many other places you go to you to find it, you have to delete a file off of your machine to play it again (I think). I never had a chance to play because when I do reviews I switch back and forth between my HTML editor and the game. While in editor mode I was killed and now I can’t play the game to review it completely. From what I saw, it was hilarious. The link is to the Kongregate version where there is a discussion about how to play the game again.

Description: Hilarious platform game – but you can really only play one time. The white elephant nature of the game is very clever, funny and buzz worthy. I appreciate the humor and subversive behavior. I’m all about being a Raitendo fan. But, I want to play this game again! The animation sequences alone were funny as hell.
First Impression: FUCK!
Rating: From what I saw, it was a very good game and really funny. If I can play it again, it will get a A+. Right now, it gets a C.

Description: A three-way fighting game that will absolutely blow your mind!
First Impression: Quite simply a work of art in Flash gaming. Just go to the link and play it. You will need to reconfigure the keys if you have a small Mac wireless keyboard, but it is worth your time.
Grade: A+. If you like games at all, especially SNES style fighting games, then you will love this game. Add it to your portal NOW!

Name:The Prince Of Whimsy Saves Poetry in (Brownian) Motion (Mochi missed a good one me thinks).

Description: An action game where you create poetry. What a treat. This is a very unique game.
First Impression: I think you are an amoeba and you must swim around the screen, collecting words to lines of famous poetry. Once you have collected 3 words on a screen, you can attack the monsters that want to eat the remaining words. There are heath powers up, and more.
Grade: B+. This is a very very fun and inventive game. Moch did not Feature it (yet), but they should have.

Posh Spice Dress Up: I’m never sure what IP issues there are with games like these. I mean it doesn’t look much like Posh and it is parody, so it might be ok. In any case, as Dress Up games go, this one is done very well. The piano music and sound fx are nice and the overall presentation is genuinely pleasing. I can’t fault the genre just because I hate dress up games. Grade C+. Get rid of the stolen photo of the Spice Girls at the end of the game and it will be at least a B-..

Martian Dress Up: Again. like the Posh game, there is nothing bad about this game. The presentation is great, but is really isn’t a game, its an activity. No stolen IP and it looks and sounds great. Grade B- (See, Posh, see what you could have had if you just had not put up a stolen picture…)

Cassandra The Witch: Hmm, these are growing on me. You get to put on and take the clothes off of a pretty hot looking (illustrated) “witch”. It’s not Maxim Girl Of The Day, but I play Flash games all morning, so I have to make do. Again, like the other versions of this engine by Tudi, they are all very well done, high quality dress up games. If you want some for your site, choose the ones w/o IP issues. Like this one. Grade: B-

Traditional Clothes Dress Up: Wow! 4 in a row and I have not decided to scratch my eyes out yet. This is actually an AWESOME dress up activity. You can choose from one of several different country flags and dress up your girl avatar in traditional dress from any of them. The music is nice and it is very well done. Grade B. That’s pretty damn solid for a dress up game. In my opinion, Mochi user, Tudi, is probably the best at making these games right now. Look for dress up games by that user if you need them for your site.

N-Puzzle: Play the traditional sliding block number puzzle on progressively more difficult (read more sliding numbers) puzzles. Not much new here, and the sounds are a little too hash. The player wants softer sounds in a puzzle game (most do any way). I decent game, but nothing special. Grade C.

Romantic Dating Night: Dress up Angelina and her boyfriend for a night of SEXUAL PLEASURE (actually sitting on a bench, looking at one another). Snide remarks aside, this is a very well made dress up game. Am I getting soft? If I had a portal for girls, this would go up on it. It don’t know the song, so it might be stolen, but I am going to give this game the benefit of the doubt because I am charmed by Angela. Grade B.