Wow, what a great day full of wonderful Mochi games. Oh, we have a few mediocre games, but really, this is the most A grades I have given out. Maybe Wednesday will be the new golden day of gaming (like new releases Tuesday for traditional media). I hope this keeps up. Oh yeah, there was on D-, but that is to be expected. 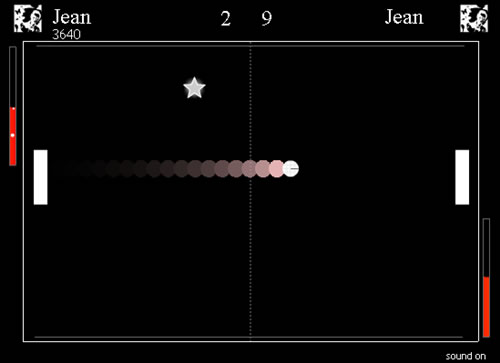 Why is this the featured game: I love retro evolved games and Neverending Pong is the best pong variant that I have played. From the hilarious player selection screen to the beautiful music, sound fx and graphical presentation, I will be going back again and again to play this one.
Description: Play pong to become world champion (Street Fighter Style). You can play two people at the same keyboard, and it is a lot of fun.
First Impression: Wow, this is a cool game. I love the modern take on ball trajectories and all of the little zar jaz that was added.
Rating: A.

Name: Hovernauts (really the 2nd game of the day)

Description: An outstanding multiplayer shooter with teams of tanks.
First Impression: Sweet Jesus this is a great game. It would have been Game Of The Day, but I reviewed it a couple months ago all by itself. I reserve game of the day for a new game that I have not played (or reviewed) before. This one should not be missed though.
Grade: A. This is one great game. It needs to be played A LOT.

Name: Alien Craft: (also could have been game of the day)

Description: Basically Dune II (one of my favorite games of all time) in my browser.
First Impression: FUCK YEAH! A full RTS game that makes sense and is not just a TD game in disguise. BITCHEN!
Grade: A. Play it, love it. Don’t push it too hard or ask for a ring, it might get anxious, and leave, but still want to be friends.

Description: Guide your glowing circle through the maze. Pick up the green “triads” and watch out for everything else.
First Impression: This is a really really nice Pac-Man / puzzle game set in a space theme with wonderful ambiance and delightful music.
Grade: A. What more could I want from a space puzzle / Pac Man game…”notin'”.

Description: A deceptively simple but engrossing fun puzzle game. Simply click on the squares with numbers to move about the grid. Any square you want to move to must contain a number that is greater than, the same or 1/2 the number on your current brock.
First Impression: I got a 35 on my first try. Not bad, but not too good.. But, the key is that I want to play again.
Grade: A. One of the best puzzle games I have played in quite a while. The presentation is retro-modern (what ever that means, I just made it up and it as a contradiction in so many ways). But look at it and you will agree. The game is by Lawrie Cape, whose blog I read and whose games I love. I didn’t know that before I reviewed it.

8bitrocket Capsule Reviews: (sorted by grade for her pleasure).

Swizzlepop (whirled) : A Multiplayer version of the already fantastic (Book Worm Deluxe-like) game, Swizzlepop. You will certainly enjoy this one if you like word games at all. Everything is high quality. Grade A.

Semantic Wars: Wow, what a unique combo word / strategy/action game. You have 3 different warrior types that are always on the attract and you can upgrade their abilities by guessing words (hang-man style). Everything about this game looks and plays great. The music and presentation are simply beautiful, but I the random nature of guessing words is a little painful. I like it, but A LOT of people will LOVE this game. Grade B+.

Cuby: Cuby is a little of a surprise. I thought it was going to be the second Rubik’s Cube game of the day, but it turned out to be a pretty unique puzzle game. You have a large cube on a rotational axis with 9 interior cubes. You also have a model cube that has 9 colored cubes. You must swap the color of each of the 9 interior cubes to match the model cube in limited time. The implementation is great. There is no sound, but that might be good for a game such as this. I got bored after a couple puzzles, but I’m sure there is an audience for this game. Grade B.

Echo the eco-friendy dolphin: A “fire balls from the bottom of the screen to the top to make match-3 matches” game with an under sea / echo theme. It is done well, but the Echo The Dolphin part might be a stretch and it might also be owned by Sega. Grade B-.

Rubik: A well done Rubik’s cube simulation. I’m sure that name is a TradeMark of someone and (especially tied to a game that is exactly like the one it is tied to) and should NOT be used. Other than that, the sounds are little annoying, but it is a pretty good game. I love that you can spin the cube. Grade B-.

Truck Parking: The Good: Well designed,. well implemented, physics are done right, the music works, and lot of time was put in. The Bad: Parking just isn’t a fun activity, not in real life and certainly not in a game. The music doesn’t loop properly either. Some people will dig this game though. Grade B-.

Extreme MTB Trail: This physic-based down hill “lean forward / lean back, don’t lean too much” style game looks nice and the physics are well done. Why then can’t they put a proper hit area on the title screen buttons? Also, my bike rider can turn over on his head and peddle for a long time upside down. There are some bugs, but it looks nice. It needs some clean up. Grade C+.

The Egg: The Egg looks nice and they spent some time on the visuals. I’m not too down with the game play though. You have to sit on eggs long enough for them to hatch, and watch out for the fox. It is a solid, simple concept, implemented well, but there really isn’t much to do. The music is a little grating. Grade C+.

Scariest Maze Game: Move your square through the maze and try to get to the end without touching the walls (and watch out for random startling events). Kind of fun. It looks like an Odyssey 2 or Fairchild game (look it up). Not shabby, but not great either. The random startling events use someone else’s IP. Grade C-.

What Are The Lyrics – Metallica: A very simple quiz game where you finish off the lyrics to Metallica songs. Given how much Lars and the gang LOVE to share their IP on the internet, I wouldn’t touch this one with a million foot pole. Very basic implementation. Grade D-.