I am still catching up with the non-featured games today. It will possibly be Sunday before I actually get to them all (sans most of the Dress Up games). There are some nice quality games, some puzzling ones, and some dreck in today’s line-up. 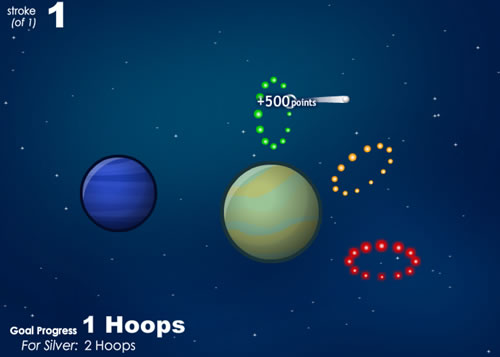 Why is this the featured game: Gravitee 2 is one of the best trajectory puzzle style games created for the Flash platform. It should be a hit on any portal that adds it into the mix. I’m terrible at these types of games, but even I can appreciate the mastery it took to put this one together.
Description: Gravitee 2 is a game where you must play “interstellar golf” by firing balls from one planet to another through “hoops”. You must puzzle through the trajectories and other obstacles on the 40 levels with 90 awards to win.
First Impression: Cool. I never played the first game, but now I know what all the fuss was about. This is the premier trajectory puzzle game and it is so well made.
Grade: A

Description: Dodge the swarm of sweet particles and collect power ups in the well made and simple gaming contest.
First Impression: The music and simple visual with extra fx and zar jaz is a treat
Grade: B+

Description: This is a very fast paced, really fun and simple tower defense (the classic type with right to left attackers).
First Impression: It looks simple, but the sheer number of attackers, weapons and the nice linear style of play will be good for TD novices. Plus, shooting and popping the heads of the stick figures is pretty damn fun.
Grade: B.

Description: A good looking little game where you must fly a bat up through a tower to escape with dodging all likes on baddies.
First Impression: At first I couldn’t figure out what to do. Just just hold down the mouse button and move up the screen, dodging left and right. It’s pretty simple, but the cartoon like visuals are very well done. The game is a little bland in places, but it certainly is a quality production.
Grade: B-

Ball Breaker!: A relatively simple puzzle game where you must stack falling balls and once 3 or more of the same color are stacked, you can click to remove the bottom one. Fun for a short time, but the presentation is a little plain. Grade C+.

Army Defense: A relatively simple looking Path Defense game with some cool 80’s game-style music. It isn’t much too look at and the music can become kind of annoying. But, it isn’t a bad little defense game and these take some time and some good code skills to complete. Grade B-.

Waitress Girl Dress up: I’m trying to let the dress up games stand on their own without reviewing them because really, those who play them and put them on their portals don’t really care what I have to say about them. But, I have always had a soft spot in my heart (next to the deep dark coal) for waitresses. This one is pretty well done. Grade B-.

Laser Survivor 3: Move the green ball through the room and try not to get hit by the lasers. Technically competent, but this has been done so many times before. Grade C.

Game of the Same: Compare two (or more) grainy pictures containing rows and columns of desktop icons. Your fun task is to decide whether or the two pictures are identical Grade D.

Kebab Fling: Hmm, this is a good idea with some funny graphic humor. It’s also relatively good technically, but it isn’t mush fun because it is so difficult. You must try to make a Kebab from the ingredients flying at your kebab stick from the right of the screen. I’d quit this job right away, as I think OSHA laws prohibit food throwing in kitchens as a way to prepare fresh ingredients. In any case, this one needs some work, but has potential. Grade C-.

Friki Race: Technically, this might be a port, but I have never played the original. It actually is nice little racing tech demo with no sound. It could have been an 8-bit computer game in the 80’s because it has that look. With some extra polish on these retro visuals and maybe some sound (and better collision detection), they could have something here. As a demo of what could be, I give it is B-. As a current game, it is a Grade C-.

Planet X: This one, like Friki Race seem to be ports or emulated 8-bit games. Planet X is actually a really cool, fun shooter. My favorite games are space shooters, and this one is quite fun. Again, with some sound, this one would be much better, but as it is, it is a fun little shooter. Grade B-.

Present Panic: A cool little Christmas themed platform game that also seems to be from the same emulation (or platform port) as Friki race and Planet X. This one concerns Santa trying to collect presents. Not a bad little retro game, but these need some sound and all of the controls are very very loose. Grade C+

Ultimate Peg Solitary: This is a really well done version of the “jump” peg solitaire game where you attempt to leave as few pegs on the board.You progress from 2 pegs up until you can no longer finish. Pretty cool and fun. Grade B.

Road Rage: In this game you drive up a very nice looking scrolling road and bash and shoot all the cars in the way. It is done well and looks nice. The sounds are terrible though, and I never could understand the point or why my game was over. There is some fun and quality here though. Grade B-

Explodaball: Hmm, the goal is to move the mouse as fast as you can over the mines and make them blow up. You are timed, and the faster you do it, the better you are. The mines explode kind of nice and it is a simple idea that might get multiple plays from REALLY REALLY bored old people. It could do well on certain portals. Grade C-.

Lightaball: See Explodaball, but this time you have a grid of lights that must be lit before the time runs out. Not as fun or as well done a Explodaball. Grade D.

Gem Twist: A unique little Match-3 game where you move Gems in groups of 4 by rotating the group. Fun and well implemented. Grade B.