All great games today! Just this batch will have you playing awesome free games for weeks. Who needs a Wii or Xbox Live Arcade with this set of gems? Pretty much all of them could have been Game of The Day, but I reserved that for the most kick ass Asteroids blasting contest I have played in a while. 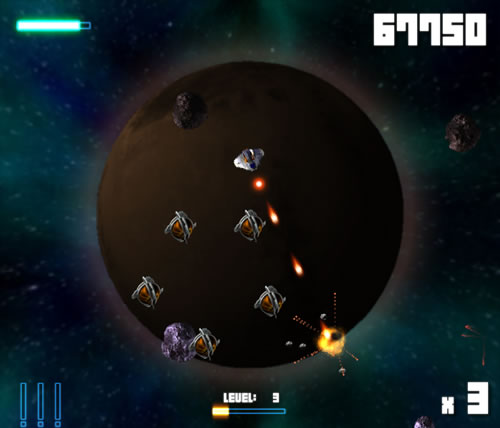 Why is this the featured game: cronusX is quite possibly the most cinematic version of Asteroids (without being bloated with story and cut scenes) that I have ever played. Everything is hard-core top notch: From the convex retro arcade display monitor look to the old-skool mid-20th century dynamic music, and awesome game-play, cronusX is a pure winner.
Description: Using the venerable WASD keys to move and the mouse to shoot, you must blast the rocks, collect power ups, and watch out for the various baddies. It may sound like old hat, but the implementation is on par with the best in the business.
First Impression: I have been a fan of Squize, his sites, his games, and his Zar Jaz for a couple years now. I hold that bias high in the air when I proclaim cronusX to be one of the best versions of Asteroids created on the Flash platform. This game is just pure fun.
Grade: A+. No one does it better than the GWY team. They have set the bar very high.

Description: This is a crazy as in good and difficult puzzle game that could have been game of the day also. It sets the bar very high for all puzzle games that come after it. You are a Pirate (a ball pirate) that must roll around the various islands collection your lost treasure. The islands tilt as to roll in various directions, making it a very decent challenge.
First Impression: WOW! Just wow! This could sell on the Wii for $20 a pop, but we get it for free! Everything in this game is outstanding – from the 3d environment, to the music, fx, cut scenes, and game play. It is a little on the difficult side, but hey you don’t want your games to be too easy, now do you?
Grade: A+

Description: OMG, this is such a freaking awesome word game. I think Steve will literally poop his pants when he plays this one. It is the 3rd game today that could have been Game of the Day.
First Impression: This excellent quality shooting content asks you to create words by shooting the letters in front of the western outlaw foes. You eliminate letters to create words and send the baddies to boot hill.
Grade: A+.

Description: An excellent retro-style adventure game. This is the sequel to one of the best little Flash adventure games of all time.
First Impression: I played the first one for about 1/2 hour but never finished it. This one contains some awesome 80’s inspired music and some fun interactions and puzzles.. Its no secret that I value game-play over visuals, but I absolutely love good game play, combined with retro visuals. This one has both.
Grade: A.

Description: A funny, Contra style shooting across the earth’s surface. The Gummies are attacking and you must kick their collective ass.
First Impression: This is a very fun, well made shooter. It reminds me of Contra, and this is probably the highest honor I can give any side scrolling run and shoot contest.
Grade: A- It would have received an A, but the the GamesFree.ca logo in the lower left is too way to click on when trying to shoot the little gummy dudes.

Description: Wicky’s new adventure takes him to hell? I have no idea actually, but it looks sweet (and hot), and plays pretty well.
First Impression: This is a nice little retro platformer with s style all it’s own. It is quite fun and original.
Grade: B+

None today, but I will have a lot of catching up to do next time around.