Here is another short preview of our book The Essential Guide To Flash Games from Friends Of Ed. 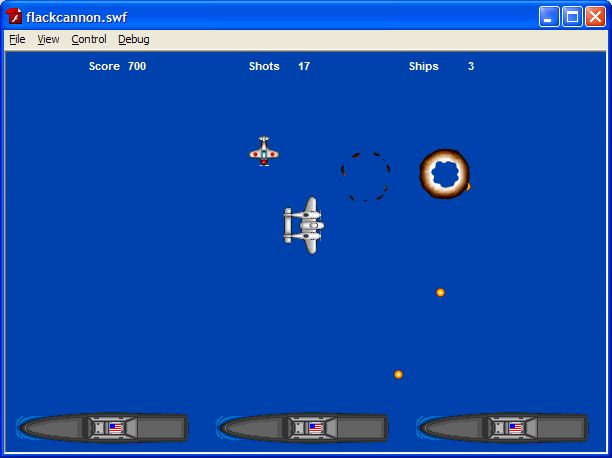 The first real game discussed in the book (taking up over 70+ pages) is named Flack Cannon.  The game is a take on Missile Command in which you try to defend your ships from incoming “Kamikaze” planes.    The point of these two chapters is to introduce a game using our optimized game framework (game timer loop, state machine) with a simple game.  It also introduces an AS3 sound manager, bitmap collision detection, vector based movement, animated sprites, ramping difficulty with “knobs” and a lot more.  This is the first of three games that use SpriteLib (Ari Fledman’s

Sprite Library), so that is why it looks cool.   However, the engine is pretty universal and could be used for almost any game of this type.

In my opinion the “Missile Command” genre has not been mined to it’s full potential.  I look forward to see if anyone can take this engine and make something really great from it.