These were always my favorite types of arcade, video, and computer games, so I scoured the “Coins”, “Featured”, and “Recent” Mochi lists for some arcade blastin’ titles to review.

Games of the Day: Tank Destroyer

Tank Destroyer is a very well made, over-head scrolling 2D arcade blaster. You man a tank that can be upgraded with an arsenal weapons and you are tasked with destroying all of the enemy tanks. 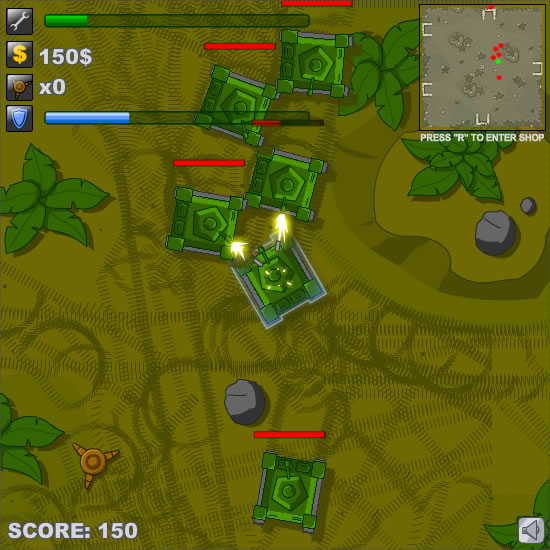 The mouse moves the turret, the WASD keys move the tank (Asteroids style) and the F keys fires your ass kicking missiles.You also have mines that you can drop. The music, sound fx, and overall presentation are all very well done. This was the most fun I had today playing Flash games.
Grade A

Gravitor: Another in a series of well crafted LongAnimals retro arcade games. This one is a combo of Geometry Wars, Gravitar and Oids. I love the concept, but I had a lot of trouble with the controls. I can’t blame them because I’m old an lame though.
Grade B

Bug Squad: A ridiculously fun little arcade shooter. You are in the bed of a pickup, driving right to left, manning a missile launcher. Chasing you are a variety an animals that all carry some sort of flu like virus. Your job is to blow them up into sweet sweet particle glory. Satisfying to say the least.
Grade B+

Mummy Tombs: Mummy Tombs is a very nice looking, fun over-head shooter with a psuedo-3D look and feel. Your job is to run about the nice looking Egyptian themed levels and kill all of the Mummies. There are multiple different zombie-like Mummies to blow up, and you can use your own hit points to buy new weapons. The carnage is fun and the presentation is well crafted.
Grade B+

Halloween Kill Zone: Little kids will dig this simplistic game reminiscent of very early Flash contests (would these be retro now?). Halloween themed baddies float across the screen and you shoot them down by aiming with the mouse. The graphics are pretty well done, and it doesn’t pretend to be more than it is.
Grade C-

Spiders Attack: A little like a junior version tank destroyer. While Spiders Attack lacks a certain polished sheen that I have come to expect from the best Flash games, there is no denying that at its core there is a nice little game engine and some fun blasting game play. You are in a tank and you must traverse the scrolling 2D world., blasting all of the spiders and find the exit. Nothing complicated, but there is some fun to be had.
Grade C+

Target Shooter: The very simplest of target shooting games. As a demo of junior coding skills (basic movement and creating a count down clock) it is pretty decent. For an ad supported game to compete with even the mediocre games in the mash-up, it will go no where.
Grade D.

Indirect Assault: Well, it doesn’t involve shooting, but it does involve a sweet weapon tethered your ship. This game a akin to Asteroids and Space Duel (think tethering) with no shooting involved. The lack of sound is annoying, but it is a fun little, well coded contest.
Grade B.

Jump ‘n Gun: Jump n’ Gun is solid little retro-style platformer where you run, jump, collect coins and jewels, and shoot. The music is retro and bouncy and the graphics are very nice little pixel art sprites. The game play is a little on the fast side and some of the physics for jumping could be tweaked to make them more “realistic”. Those really are game design decisions though, and what is “realistic” in a game genre where the coins you collect are the same size as you body anyway? If you like retro side scroller games like Super Mario Bros, you will enjoy this one.
Grade B.