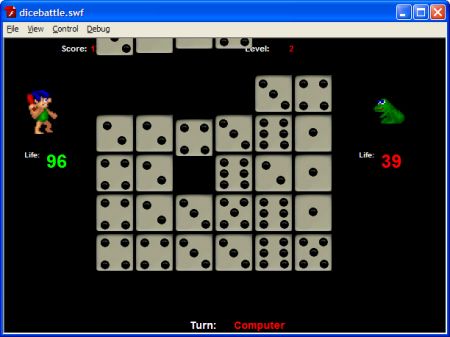 Here is an alpha sample screen of the game “Dice Battle” from the “Essential Flash Games” book.

This game builds upon the material in Chapter 8 (Color Drop), adding ramping machine-based A.I., a soundtrack manager, multiple enemies in battle-style puzzle game like Book Worm Adventures or Puzzle Quest, plus a bunch of other enhancements.  This another game that uses the graphics in spritelib.

The A.I. algorithms are all custom and designed to be as efficient as possible.  They are based on the color-matching routines in Ch.8.  We have added an intelligence to the code that allows the computer to make decisions based on it’s level of ability.

As you can from the screenshots from the various games that Jeff and I have been posting, that the “Essential Flash Games” book contains many different styles of games, many that have never appeared in a book before (that we know of).