I wanted to do a full blog and site mash-up today (along with Mochi
Game Reviews), but I that task is so daunting, I decided to stick to
just reviews for another day. I searched out retro games again (or those
that were probably inspired by retro games) because, unfortunately, I
am THAT guy.

Game
of the day: Vector Conflict The siege:

Wow, talk about a game that literally rocks, this is it. It’s a little
like the classic Atari coin-op, Battlezone in style but without the
movement through the 3D play field.  You man your turret,
rotating 360 degrees  and fire (helped
by your radar) your extensive arsenal at incoming hoards of
enemy craft. 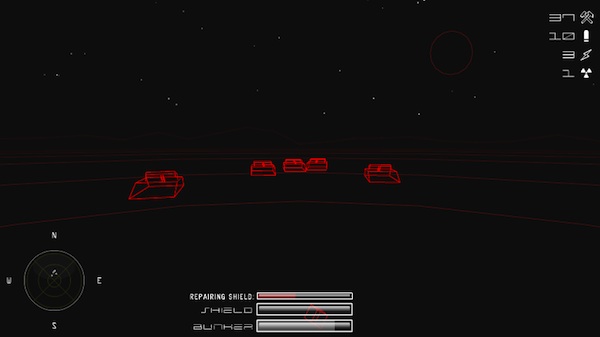 There are many upgrades to obtain, and everything looks and sounds
first class (especially the rocking soundtrack).  I would give
it a slightly higher grade if you could travel through the 3D space
rather than just rotate, but it’s gets a great score anyway.
Grade
B+

Magnets:
Not strictly a retro game, but this one is so well done with all of the
subtle touches I would expect from someone who studied under (or at
least played all of the output from) the masters of the medium. This
unique puzzle contest pits you against a play field of graph paper and
desktop widgets (erasers, etc). Your job is to place magnets around the
play field in order to direct polarized particles from one emitter to a
catcher. Obviously this game was designed by someone much smarter than
I.
Grade
B+

Obechi:
The retro connection in this game is Qix. I have no idea if
the author thought of this game when he/she was building it, but to me
all “filler / catch enough inside” games come from Qix just like TD
games really owe their debt to Rampart (in many ways). Anyway, in this
well-designed contest has you catching floating particles by
encapsulating them inside a circle that you create.  This one
looks simple, but is pretty tough after level 5.
Grade
B

Assembler 4:
I can’t think of a retro game that is much like Assembler 4, but since
this physics based puzzle genre seems to have been around for 10 years
now, and because this game is so sweet, I’ll just chalk it up to
nostalgia anyway. Use the gray boxes and wooden shapes  to get
the green boxes (and shapes) into their outlined homes. Simple
elegant fun. If the Activision guys had a good physics engine to work
with, I could see them having made an Atari 2600 version of this game.
Grade
B

Energy Leak:
A quality little arcade game not unlike Breakout / Arkanoid, but with
game play elements all its own. Bounce the energy balls into the
collecting conductors. The game starts out slow and takes a little
while to ramp up. Give it a chance though, The presentation is first
rate, and the action does begin to heat up.
Grade
B-

Macrophage:
A simple little arcade shooter completed in 24 hours. The music,
concept and design are all very well done, especially given the time
frame it was produced in. Your job is to protect the heart by killing
the pathogens that are moving left to right. The music is especially
well done. There was an old Atari 800 Gebelli game a little like this
(he went on the be a designer for the Final Fantasy NES games). This is
one pretty fun.
Grade
B-

Robot Bimmy:  Your
job is the “jump” up the the bean stalk (scrolling up), collect items,
double jump and blast meanies. It doesn’t look like much, but it has a
certain charm.  Watch out for the nasty birds. The branches
will start to disappear, so falling down can be vary hazardous.
Actually a  pretty good little effort here.
Grade
B-

UFO Attack:
Do the words “unfinished school project” scare the crap out of you when
you look at a game’s description? They do to me, but guess what, for an
unfinished school project, this is an outstanding effort. For a game
that a portal will want to place on the front page and earn ads $$,
not so much. But, that aside, I want to encourage this
developer to keep making games because I have seen so so so so much
worse, and I might even play this one a little bit again.
Grade
C+

Zero:  This
is an interesting one. It is a little like a very modern version of
Mattel Intellivision Space Battle. That game was supposed to be a clone
of the Atari 800 classic, Star Raiders, but the Mattel hardware
couldn’t (at least until the developers got a better handle on the
system) handle the pseudo 3D / First person space correct.  So
it seemed like you were firing at a black wall filled with scaling
enemy. This game seems like a very pretty, well made version of that.
Did I make it sound bad, because it is not bad, just a little odd.
There are many things to shoot at and the music/visuals are first rate.
For some reason you fire with the space bar, but move with the mouse.
To each his own. I like it though.
Grade
B-

Baldy Dash:  I
usually avoid advergames, but I like the Shaun The Sheep guys. In this
simple little contest, you just need to use the mouse to drive the
truck over the wigs. It looks good, is well coded (except for a bug
when trying to click on the truck to start the level). I know how
advergame design goes, so  I cannot disparage the simple
concept because design by committee can be oh so much worse than
this. Plus, young kids will love it.
Grade
B-

Pumpkin Wars: This
is a very well made scrolling shooter where you control a witch in 1/2
a pumpkin. Your job is to shoot baddies and collect candy and other
items. The backgrounds and parallax scrolling are awesome, but the
menus are controlled by a custom cursor that doesn’t show up right away
and makes for a very difficult start to the game. I’m afraid a bug like
this might keep it off of some portals. The action is good though and
it seems to have been well coded. I am using a Mac with
Firefox 3 if that is any help to the
developer.
Grade
B-