BlasterMines is the second game released as a demonstration of the Essential Flash Games Book.  Unlike Tunnel Panic (from 2 weeks ago) very little was changed or added to this game from the book version.

BlasterMines is an update of the game Mine-X 4K that I created for the Game Poetry 4K game contest in 2009. Every line of code was changed and optimized for render speed from the 4K version. Sounds were added, the game loop timer was changed to a time-based step timer, the particles and projectiles were placed in pools for re-use and much more. The control was modified to just use the mouse and the ship auto-fires so no one gets a bad case of “mouse finger”.  Also, this chapter in the book (chapter 11) shows the reader how to create my frame rate profiler, and add pause and mute functionality to the game framework we build throughout the chapters. 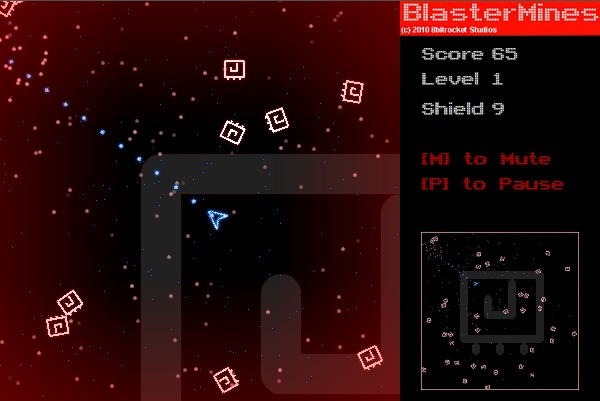 The mine symbol (used for the things you shoot and the back ground) was created by none other than the famous TonyPa.

In the coming weeks  we are going to be releasing more games from the book (hopefully two more by the end of this week actually). Both will use the basic engine from the book but be updated with more modern Flash game themes (read Zombies, Aliens and Mutants, and assorted what-nots).